What started out as a dream of adventure for two mates locked down in the depths of Victoria’s COVID restrictions, has now taken on a much greater purpose.

Ballarat’s Tyler Dittloff and Horsham’s Tyler McRae set off on the trip of a lifetime last weekend when they begin a 4500km trek from Horsham to Cairns. 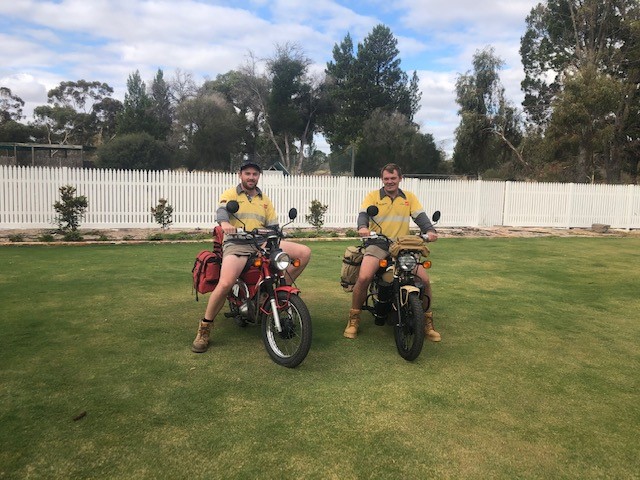 Both lineworkers at Victoria’s largest electricity distributor, Powercor, Dittloff said the pair’s mode of transport would involve a little less power than they’re used to.

“We’re taking posty bikes the whole way up,” he said.

“It’s about 4500km going up and around the coast and we’re realistically going to be only averaging about 60km/h.”

Dittloff said the idea came during COVID restrictions in the first part of 2020, when all travel interstate – or anywhere – shut down.

“I read a book about someone who had done a trip on a posty bike and I just really liked the idea, so I went and bought one,” he said.

“I told Tyler (McRae) and the next day he got one too. That’s where it all started.”

The bikes have since been customised, with new paint jobs and accessories, but petrol tank sizes and engines remain stock standard – meaning the trip won’t be over in a hurry.

The journey began in Horsham, before heading across to Ballarat, down to Queenscliff, on the ferry over to Sorrento and they are now making their way town-to-town up the coast.

They’re staying at backpacker-type accommodation or on friend’s couches along the way, getting their bikes serviced at the half-way-mark in Brisbane, before continuing to Cairns.

“In all, we think it will take us about 21 days,” Dittloff said.

“We started mapping out the route back in COVD and we decided to go around the coast because there’s plenty of places to stay and it’s not that bad if we break down or get stuck.”

Since then, the trip has taken on greater significance, with the pair beginning to use their ride to fundraise for the Shorter Brother’s Foundation, set up to support the family of Max, William and Hudson Shorter, who are all battling a progressive neuromuscular disease called Duchenne Muscular Dystrophy (DMD).

The boys’ father, Leigh Shorter, is also a Powercor employee and his brother Dale was too, before he tragically passed away from bowel cancer in 2007 at 25 years old. Powercor’s annual award for most outstanding apprentice lineworker has since become known as the Dale Shorter Memorial Award.

“We thought it would be worthwhile to raise some money for a good cause along the way, and we couldn’t think of a better cause than supporting our work colleague Leigh and his three boys,” Dittloff said.

“People can donate what they can, but we’ve suggested one cent per kilometre, which would be a $45 donation.”

You can donate to Shorter Brothers Foundation here (mycause.com.au).