Powercor has installed new technology to further reduce the fire risk in key sections of the network near Geelong.

Work to install covered conductor technology is now complete, with more than 17km of powerline at Modewarre now replaced.

The upgrade is part of a $4.2 million program to install covered conductor technology, which also includes at Woodvale and Bridgewater North, near Bendigo.

Covered conductors are overhead powerlines which have an insulated covering around them. They are being rolled out in targeted high bushfire risk areas and installed when existing powerlines reach
the end of their service life. 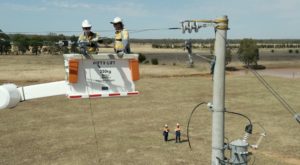 Safety and reliability of powerlines are dramatically increased with the use of covered conductor, with a fire risk reduction rating of more than 98% when compared to bare wire lines. The technology can
also be typically rolled out faster and more efficiently than methods such as undergrounding.

The installation at Modewarre, as well as at Bridgewater North and Woodvale, are part of a trial to determine whether the technology can be rolled out across the network more extensively.

The upgrades come after Powercor completed a $3.6 million project in 2020 to underground more than 15 kilometres of powerlines at Paraparap.

Powercor Manager Network Assurance Dene Ward said both the covered conductor upgrade at Modewarre and the undergrounding work at Paraparap were part of a broad bushfire mitigation program which also included asset inspections, vegetation management and the installation of smart technology to identify faults faster.

“Safety is always our number one priority and everything we do on the network is designed to keep it safe and reliable for our customers,” Mr Ward said.

“This technology is showing a lot of promise and avoids some of the delays we encounter with undergrounding, such as when we hit hard rock.”

“We’ve worked closely with local government and with landowners to minimise impacts for these communities during this work.”

These upgrades are just the beginning of a range of major improvements to the Geelong and Surf Coast power networks, with new bushfire mitigation devices set to be installed in the region over
the next two years. 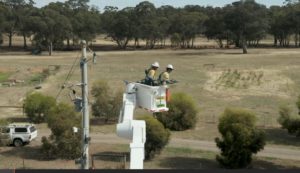 The Rapid Earth Fault Current Limiter (REFCL) devices, set to be installed at Waurn Ponds, Gheringhap and Torquay, respond almost instantly and reduce voltage to powerlines when they detect faults on the network, helping to reduce the risk of fires staring.

“We’re doing everything we can to keep the lights on and communities safe,” Mr Ward said.