Powercor crews helped rescue a koala and swamp wallaby within minutes of each other at Cobram East on Monday, in an action-packed afternoon for line workers.

No strangers to spending time up poles in all conditions, Cobram lineys Brett Anthony and Kevin Bristol were called to assist local wildlife shelter Dutch Thunder after nearby residents noticed a koala at the top of a 12.5-meter power pole on Chapel Road.

The koala appeared distressed in the 37-degree heat and the Powercor crew were able to access the marsupial using an Elevated Work Platform vehicle.

Liney Brett explained the delicate nature of the rescue.

“They were live wires, so we had to be careful with how we moved the koala and it looked like it was pretty dehydrated,” Brett said.

“Kev was able to guide it down the pole using his HV insulated stick and we had the wildlife rescue people down the bottom who were able to look after it.”

While up the pole, Kevin noticed a second animal that appeared to be battling with the hot and windy conditions on the Total Fire Ban day.

“There was a wallaby on the channel bank nearby and we were able to direct the rescuers in his direction,” Brett said.

“I’ve been doing this job for a long time and we don’t get too many wildlife rescues, let alone have two in the same day.”

You can read more about the rescue on Dutch Thunder Wildlife Shelter’s Facebook page. 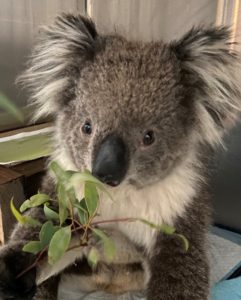 The female Koala getting a well-deserved snack after the ordeal. IMAGE: Dutch Thunder Wildlife Rescue