One of the largest street light upgrade programs in Victoria has begun in Greater Geelong.

Geelong city and energy distribution company Po wercor are replacing the first of about 15,000 residential street lights with LED luminaires.

The LED luminaires, including new smart PE cells, are about 85 per cent more energy efficient than the existing mercury vapour lights.

They will provide higher quality and better directed lighting, with a greater spread across and along the street.

The inclusion of smart control technology will enable remote adjustment of the lighting output and deliver improvements to road safety, public amenity and asset management.

The rollout is the first stage of an overall project that will convert all of Greater Geelong’s 25,000-plus street lights to LED.

“The municipality-wide upgrade will have significant impacts for our community, our environment and the economy,” Mayor Asher said.

“The huge reduction in energy consumption will see us save more than 8000 tonnes of carbon emissions each year.

“This will allow us to redirect about $2 million annually, from the lower energy and maintenance costs, into other public services.

“It will also provide better-targeted and higher quality lighting, making our streets and public spaces safer.” 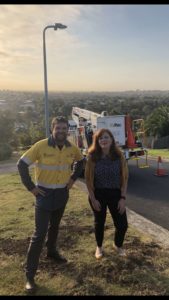 Assembled in Australia by Sylvania Schréder, the lights are owned and maintained by energy distribution business Powercor.

Powercor connects and manages 189,000 streetlights for the Victorian Department of Transport and Victorian councils, including Greater Geelong.

Powercor program manager Barry Thebes said Powercor was pleased to be supporting the City to deliver energy efficient lighting that would benefit the environment and the community.

“By working closely with the Geelong Council and the community, we are driving down carbon emissions and providing a cleaner environment for the region,” he said.

“Once our crews have replaced these lights, the emission reductions that will be delivered are about the same as taking more than 1700 cars off the road annually.”

The rollout of the first stage started this week and will run for about a year.

Lighting works on main roads will begin once the residential lighting installation is completed.

About 98 per cent of the material of the old lights – glass, mercury and aluminium – will be recycled.

Significantly reducing carbon emissions is a key feature of the City’s Sustainability Action Plan 2020-2022, which was adopted by Council last July.